Nice....wonder how many innocent people died because
you posted these easy
to follow directions for any Islamic Extremist to
build a command IED on your
site. You are obviously a very intelligent
person with either, no common sense
or no sense of
responsibility.

I appreciate his/her concerns, and they are valid to some extent. To be honest, I was aware that my "easy to follow directions" could be followed for doing much more than just opening a door. Then why did I write about it? Well, like a coin, everything has two sides - one is the good side, and the other is the not so good side. There is already tons of information on the Internet on making bombs and weapons of mass destruction. Does this mean that the Internet should be shut-down..and people should stop sharing ideas with each other? I don't think so. If we stop sharing ideas to stop terrorists from misusing them, no one will be able to make good use of them either. Besides, this is what terrorists want..they want to create an atmosphere of insecurity, mistrust and terror. If we stop sharing our ideas to keep them from getting into the wrong hands, they will succeed in their mission. Moreoever, there are several scientists and engineers who work for these extremist groups. I'm sure that building a simple DTMF decoder wouldn't be difficult for them.

So relax, and be happy. My little door opener cannot worsen the already dire situation of our planet, let alone killing innocent people. :)

Posted by Ashish Derhgawen at 7:24 AM 15 comments:

Hey folks! Here's a little something I built about a month ago, but couldn't get enough time from college to write about it. Well, it's an object tracking camera panner which tracks any object moving in close range. Unlike my previous method for object tracking, this technique will track almost any moving object, irrespective of its color, using two lasers for edge detection. Depending on which laser is focused on the object, the computer decides which direction to drive. I came up with this idea after watching a video on SoR (Society of Robots) of a sumo robot, called Stampy. Stampy uses a single IR rangefinder for edge detection. Watch the video below:

I used lasers instead of IR rangefinders. My initial plan was to use a single laser..but then it occurred to me that I would have to shake the laser left/right continuously for tracking the trailing edge of an object. So, I decided to go with two lasers instead of one. :) 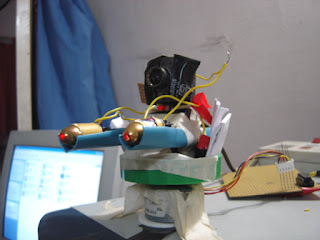 Well, I guess I've finally put my computer controlled stepper motor to some use. I might be using this object tracking technique in my future projects as it's working very nicely. If you're interested in controlling stepper motors with your computer, read my new article on Coding4Fun. Enjoy! :)
Posted by Ashish Derhgawen at 7:39 AM 35 comments: