A few weeks ago, I was invited to Engineer 2007, one of ’s largest technical symposia organized by the National Institute of Technology Karnataka, Surathkal (NITK). Fascinated by some of the projects on this blog, they wanted me to explain and demonstrate how I did, whatever I did, to the students of various engineering colleges from across .

Well, I left for Surathkal on the 5th of March. The flight took about three hours to reach from to . Then, from , I took a fifty minute flight to Surathkal. Surathkal is on the shore of the exotic and has a very beautiful sea beach. I used to spend several hours walking along the sea shore whenever I had time. This was my first trip to South India and the thing that really struck me was that the people rarely understood Hindi (the most popular language of )! I realized for the first time that is a multilingual country. I had to speak in English to communicate with them. If someone didn’t know English, I had to use sign language! 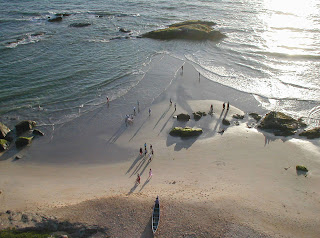 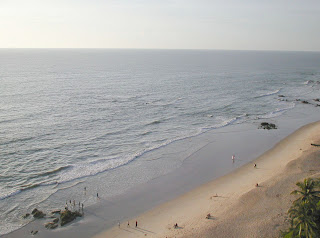 The projects I decided to show were - laser gesture recognition and parallel port driven relays (I built a new opto-isolated relay box for Engineer 2007 - more information later), computer controlled RC car, computer controlled autonomous airsoft turret and some webcam projects I did over the last 5-6 months. This was the first presentation of my life and I was obviously a bit nervous at first. However, everything turned out very good and I somehow also managed to successfully solve every little problem which got in my way while demonstrating. Phew! Everyone loved the presentation and clapped whenever I did something cool - this was a big relief for me. I’ve learned a lot from this experience. I’m quite sure my next presentation will be even better than this one. 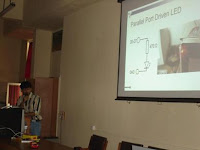 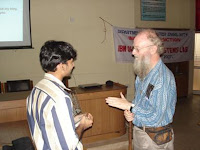 Engineer 2007 had some lectures addressed by notable people like Bjarne Stroustrup (creator of C++), Professor Kevin Warwick (aka Captain Cyborg), John C. Mather - 2006 Nobelist (Physics), Dr. Timothy Poston - mathematician and interdisciplinary scientist (picture above), just to name a few. I really loved Kevin Warwick’s stuff. I think he is most widely known for his famous work in “Project Cyborg”. In Project Cyborg, he had a chip implanted into his left arm which allowed him to control lights, doors and other computer controlled devices around him! His work on building direct interfaces between computer systems and the human nervous system are really fascinating. He also showed us a necklace he gave to his wife, which changes color to reflect Kevin Warwick’s mood! If Kevin Warwick is happy and relaxed, the mood necklace would turn blue. If he gets angry or excited about something, the necklace would flash red!

I really liked the students of NITK. They were very helpful and helped me out whenever I needed some help for my presentation or otherwise. Nothing could’ve been possible without their help. I also enjoyed watching some of the robotics events at Engineer 2007 like “Automata”. The students had to build a robot which could move through a pattern made of white lines on a black background and locate the smallest loop in the given pattern. Some of the students had built their robots completely from scratch and watching them test was really fun.

I came back home yesterday night. I’ve made some really cool friends at NITK and I’ll always remember this trip. I’ve even got some new ideas after watching the events which took place at Engineer 2007. Let’s see if I’m successful in implementing some of them.

Posted by Ashish Derhgawen at 11:39 AM

Nice post....Thanx for visiting my college...It was a nice experience...We learnt a lot from it...!!!

i wish my country would have something like this. >_<

its a beautiful sunset and hope i can be there

wow this year that contest was so hot now is a great, my country haves a similar activity.

How to Use a Garment Steam. Add water to the steamer's tank. Plug it in. Allow the steamer to heat up all the way. Similar to a clothing iron, the head of the steamer is to be pressed up against your clothes. Lastly, allow your freshly-steamed clothes ample time to dry.