I've been playing around with the Microbric Viper robot construction kit over the last couple of days. The Viper uses a Basic Atom microcontroller which can be programmed in BASIC. These robots can also be controlled with a computer using an IR transmitter. I'm using an Iguanaworks IR tranceiver which works with a serial port for my projects.

Well, since I love webcams, I decided to turn my Viper into a simple laser following robot! I've mounted a small wireless webcam on top of the robot. The webcam, transmits video to my computer. My computer determines the position of the laser in the camera's field of view and tries to move the robot towards it. As far as the software is concerned, I'm using a modified version of my Autonomous RC Car code. Watch the video above. I think the next step could be to mount the camera on a servo motor. That way, the robot would be able to scan its surroundings by rotating the camera! I also plan to try object tracking with this robot. That would be fun! 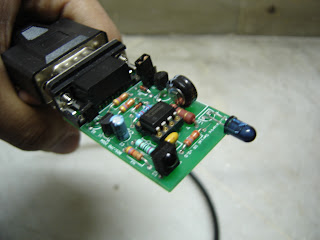 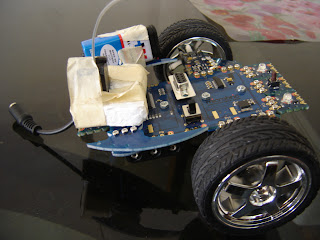 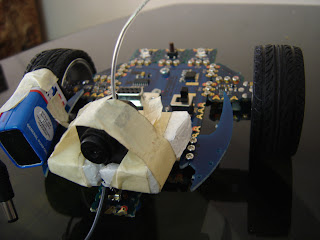 Posted by Ashish Derhgawen at 11:12 AM

Pretty neat laser follower. Must try something along those lines.

My main area is s/w rather than h/w, so am working on new programming language paradigms for toy robots.

E.g. revamping Warren's "Warplan"
(c 1975!!)
style of s/w control. One sets up the logic of the robot (e.g. kinds of modules) and its environment (e.g. locations of objects) and then describes what goal to reach -- the planner than decides on what low-level cmds to generate to reach the goal (e.g. "I want the light switch to be on").

i am greatly impressed with your work. i have gone through your blog in detail and kind of addicted to reading it. your work on the microbric viper car has left me fascinated. i am an amateur hobbyist and your work has greatly impressed me. looking forward to your next innovation on the viper robot.

Hey Ashish, loved to see your innovative ideas changing into reality....
can you tell me what to u do or study ? and since when did you start using the ideas....

I wanted to know that from where can I get this 'Microbic Viper' robot kit in India?

Impressive...Is there any way to build something like this with 4 wheels? If so can you email me at llc42084@yahoo.com

hai ashish , iam a b-tech student
now i am doing my mini project on light following robot
we are supposed to use pic16s microcontoller
will u pls help me to do this project?
my mail id is manumurali20@gmail.com

waiting for your help,

Thanks for posting this. It has been several years ago. My boy and I are wanting to build something similar out of parts, but I don't have a camera. What camera did you use? How did you get the robot to follow the laser? I'd like to build one. I don't want your exact schematic or your exact code. Could you provide a more detailed explanation of how it works. How fast is it? What speed of processor is required? Did you have the image processing look for color or for brightness?
Thanks again for posting this it is very interesting!